Posted at 10:30h in Press Release by elysiumhealth

The hospital has been developed to enable mentally ill patients to return to the South West from hospitals all over the country supporting people towards independence. Work started on the site in February 2015 and at the end of 2016 NHS England confirmed it would commission up to 75 beds at Wellesley Hospital in collaboration with Devon Partnership NHS Trust. 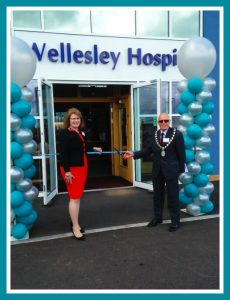 “I am thrilled to be here today, to officially open Wellesley Hospital in Wellington. There has clearly been a need for more services in the South West and I am delighted after several years of planning and through working in partnership with Devon Partnership NHS Trust as well as other members of the network in the South West that the vision has become a reality.”

“As the new Mayor of Wellington, I am delighted to be opening Wellesley Hospital today. As well as helping to bring patients who need such a specialist service closer to home, it is also helping the local community by bringing further jobs to the area and helping the local economy more generally.”

“One of our overriding priorities over the next few years is for fewer people to travel long distances from the south west in order to get the care and treatment they need.  We also want to return people to the region as quickly as we possibly can when travelling elsewhere, for their care has been unavoidable.  The opening of Wellesley Hospital is a major step forward in achieving both of these goals, and it’s great news for people in our region with secure mental health needs and their families.”

Wellesley Hospital has a team of 60 staff, and the hospital will be continuing to recruit staff during 2017 as the unit opens in a phased approach.  Interested applicants are asked to visit the website (elysiumhealthcare.co.uk) to find out about roles.

For further information or photos from the day, please contact: