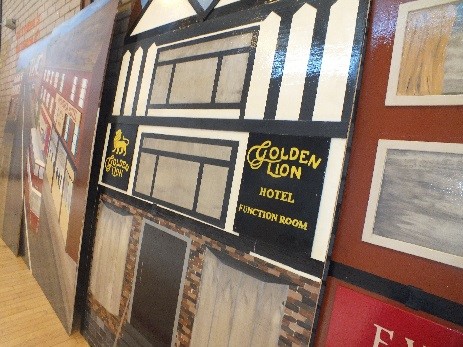 Posted at 12:58h in Press Release by elysiumhealth

Patients and staff at The Spinney were proud receivers of a finalist trophy at this year’s National Service User Awards yesterday at Old Trafford, Manchester. The team were nominated for their impressive Community Memory Wall at Wigan day care centre within the Community, Social and Vocational Award Category.

Working with a Wigan day care centre for those with dementia, the Spinney’s Occupational Therapy Vocational Team came up with a plan to create reminiscence boards showing a 50’s street scene to bring life, colour and therapeutic meaning to the outside walls of the Centre.

The project was materially funded by the Centre, but the research, development, skill and just plain hard work was carried out by patients and staff from The Spinney. It has involved the carpentry and artistic prowess of many.

Service users were involved in researching facts and photos of Leigh, Wigan and Ashton, and attempting to include stimulating images from the 1970s and back in time from there to around the 1950s.

Rena Henderson, Lead of OT and Education at The Spinney hospital commented:

“In this project, whilst some patients and staff have themselves been transported back to their youths, others have been amazed at the relatively short time in which every day life has changed so dramatically.

“The full-size boards fitted together to form a homogenised town scene; this will provide opportunities for discussion for the day care service users and their staff for many years to come. Our patients were truly inspired by this activity; it was the sense of giving something back to the community which made the project so worthwhile for everyone. The result too is also very impressive!”

The finished images – some of which were in three dimensions – included characters and occupations of that time, the cotton and coal mills familiar to the landscape, and some of the notable shops – e.g. FW Woolworths and Poole’s Pies!

The opening ceremony at the Centre last June saw much excitement and sparked many memories amongst those who use the Centre. After a tea party and entertainment for Spinney staff, patients, and centre service users, the Mayor of Wigan officially opened the Centre annex and the Memory Wall.

It was during this reception that it was realised that Walter Hurst, the former owner of Walter Hurst’s Clog Makers shop (featured on the Wall) was indeed one of the attending service users!

For further information on Elysium Healthcare or The Spinney, please visit www.elysiumhealthcare.co.uk