Posted at 11:27h in Members Blog by emmakillick 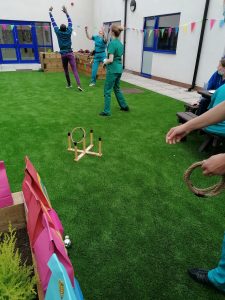 Brain injury rehabilitation is often seen as dealing with the initial recovery period, although life after the first few months and indeed years is just as important. Cognitive impairments as a result of a brain injury can affect attention, memory, and executive function. These consequences can dramatically affect patients’ lives and limit their everyday activities. Research has shown that along with creative activities, exercise, games and green space can bring real benefits to people who are likely to face the long term effects of a traumatic brain injury (TBI).

Exercise in an outdoor space that involves interaction with other people can be sociable and good fun so when that first goal is scored or a ball is caught, there is a real sense of achievement and an increase in wellbeing. Trials in 2016 found that people exercising outdoors reported higher feelings of wellbeing, and lower feelings of stress or anxiety than those who exercised indoors. In an inpatient setting, making good use of outdoor space will support patients in their rehabilitation and potential recovery and garden games such as Jenga or Connect Four help patients to follow rules and patterns which can help improve memory, speech and fine motor skills which often suffer following brain injury.

It is known that exercise increases blood flow to the brain which can improve cognition and is best participated in on a regular basis. Workouts (however gentle) that involve sequences and interacting with other people can be motivating as well as help with concentration. The activity doesn’t have to be physically taxing, it could be a gentle game of boules or quoits; it makes sense that fatigue won’t help with cognition and when tired it’s even harder to function.

The Avalon Centre, a 20 bed Neurobehavioural Rehabilitation service in Swindon has made good use of its outside space over the summer weeks with staff and patients holding regular games events in fabulous weather. On a recent clear and sunny day they decided to hold Avalon Courtyard Games which included various challenges and team events. First up was quoits, a game which demands concentration and spacial awareness, one patient showed great skill by outdoing all the competitors and remaining unbeaten at the end of the games. 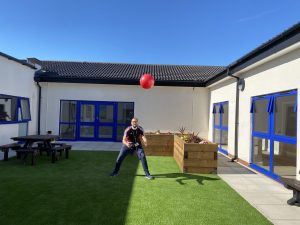 The velcro ball game was a new activity for most patients and staff and they worked together in a team so that everyone had a turn throwing or catching. Patients thought it hilarious to see the ball being gently lobbed towards staff who didn’t always duck in time, and getting the ball past the rather good Avalon goalie in staff v patient footie resulted in lots of whoops, laughter and celebration.

At the end of the day the benefits of spending time outside with physical activity were plain to see – patients were happy to relax and settle for a gentle and calm evening. Shared enjoyable experiences bring a sense of belonging, and conversation that night was very much focused around the pleasant afternoon spent outside playing games.

Click here to read about the power of the ancient art of mural painting at The Avalon Centre.